Dogecoin has been fired up as if it’s going to the moon. The technical, price action, and fundamental resolve showcased by this cryptocurrency are raising eyebrows. DOGE father Elon’s buying spree on the tech giant seems to have incited buyers to acquire more Dogecoin.

The market capitalization of DOGE reaches $18,348,266,130, now holding the 8th spot. It remains just 20% short of overtaking Binance Coin and 25% of overtaking XRP from their respective spots.

The Dogecoin rally can be simply tied to the successful takeover of the Twitter administration by Elon Musk. While the twitter deal was signed above $40 billion, the market capitalization of DOGE is yet to hit $20 billion.

This gap indicates the potential of a single person to own and dominate a crypto market movement. Moreover, ever since Elon revealed the news of being charged $8 per blue tick account, the DOGE price gained a new intra-monthly high.

On the first day of November 2022, Dogecoin peaked at $0.1588 with a huge gain. The uptrend signal showcases whales’ activities participating in the price action trades. While the technical indicators of RSI and MACD were awestruck during the initial days of this rally, the current outlook indicates a consolidation to bring in more investors.

Both the essential moving average curves have started to move upwards, forming a curve. This pivoting movement will create support for DOGE above $0.12 even if a profit-booking stance is developed at these levels.

The negative beginning today is confirming the losing control from buyers as sellers attempt to dominate the price action for some profitable entries. $0.17 has become a strong resistance level for Dogecoin, which is marginally above the currently traded value of $0.138.

From a price action perspective, the movement indicates strength and a breakout pattern, with current volatility indicating an ongoing consolidation before DOGE attempts to breach $0.20 in the coming months. DOGE has received the necessary push to incite buyers as the expected setup of witnessing DOGE crossing $1 is slowly coming to reality. Read our Dogecoin forecast to know when it will cross the $1 mark. 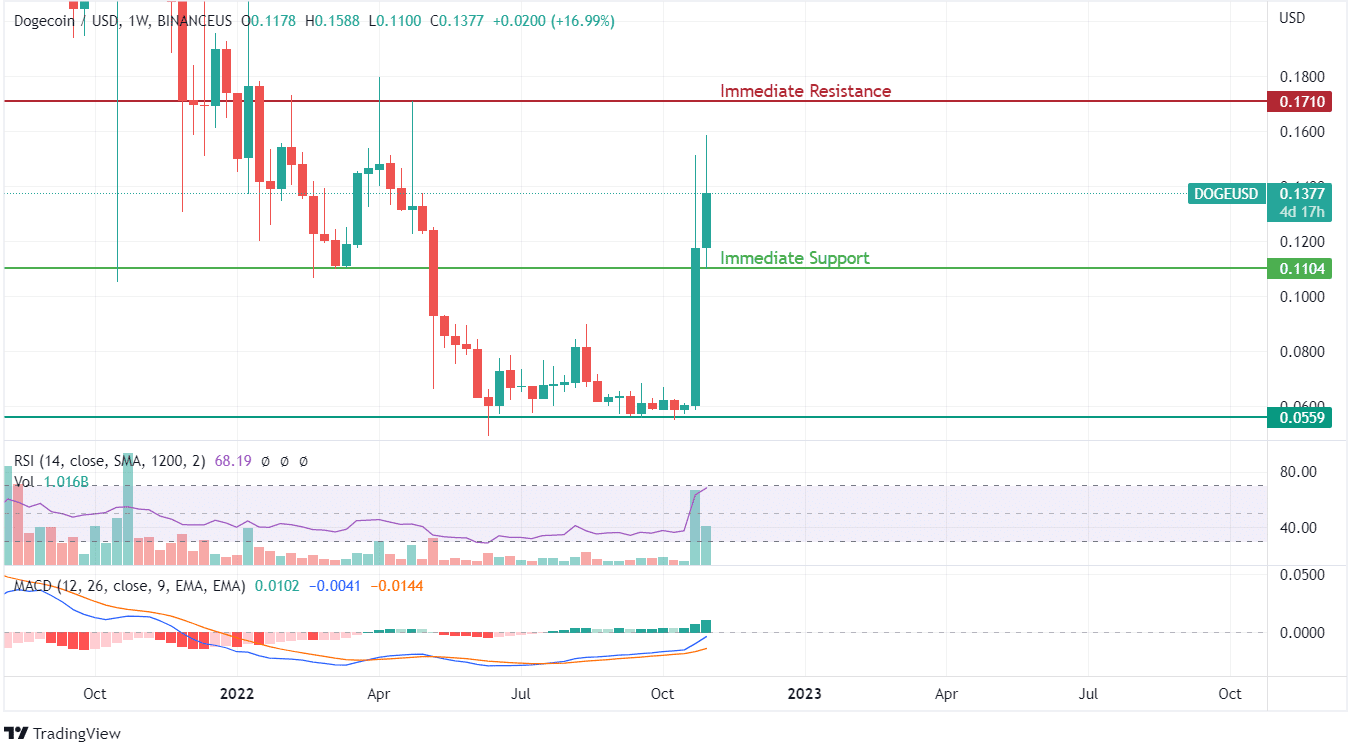 Dogecoin price action on weekly charts shows more resolve and strong movement backed by technical indications from RSI, MACD, and transactional volumes. The daily candlestick outlook is confirmed in the weekly candlestick movement as support of $0.12, and resistance of $0.178 is confirmed.

Dogecoin has undergone some profit booking recently and forms wicks at the top, indicating the attempt of sellers to book profits. $0.15 should be treated as a short-term target to protect the uptrending resolve showcased by this cryptocurrency so far. RSI has hit the overbought zones of 70, with MACD yet to enter into positive territory.

Investing in Dual Citizenship with Crypto Funds: All You Need to Know

Dogecoin has gained more than 20% in the last week, outperforming many other leading cryptocurrencies like Bitcoin and Ethereum. As...

Dogecoin has been one of the most critical cryptos; it mostly relies on price action and buying sentiment; fundamentals don’t...

Dogecoin close to its previous lows: Was DOGE surge temporary?

The movement of Dogecoin depends on market sentiment. When the market corrected over the news of the FTX liquidity crisis,...

After a long downtrend in the last eight months, the crypto market has finally woken up in the last two...

Should you avoid Dogecoin (DOGE) for long-term investment?

Dogecoin was launched in 2013 to mock Bitcoin. It has the canine face logo similar to Shiba Inu. It was...