Should you avoid Dogecoin (DOGE) for long-term investment?


Dogecoin was launched in 2013 to mock Bitcoin. It has the canine face logo similar to Shiba Inu. It was considered an amusing meme coin for their beloved community, but it became one of the ten largest cryptocurrencies by market cap. However, the problem is Dogecoin does not have a fixed supply, so it might not be as valuable as Bitcoin.

Currently, more than 130 billion DOGE coins are circulating in the crypto world. It attracted crypto enthusiasts as soon as it was launched in the market after Elon Musk backed the coin as ‘People’s Currency’, and many media houses covered the news. As a result, many retail investors also joined the community in the last two years when crypto markets saw an inflow, and thus DOGE flourished. After that, it has been in a downtrend for the last one year.

Now should you invest in Dogecoin for the long term? The answer is the price of crypto tokens depends on supply and demand. DOGE has an unlimited supply, so demand will be low in the future. On the other hand, they are also entering other spaces to extend their use cases, but it might not be useful for DOGE price unless they change the protocol algorithms.

There is speculation that Elon Musk will accept Dogecoin in his Tesla and Twitter communities, but if it happens, it may only provide a short-term benefit. The speculated bull rally will not last long. There are many less risky altcoins with better use cases, so you should prefer them for long-term investment.

At the time of writing this post, DOGE was trading around $0.059. In the last two months, Dogecoin has been consolidating between $0.055 and $0.065. The candlesticks are forming in the lower Bollinger Bands, and other technical indicators suggest consolidation for the next few weeks.

We think it is an ideal time to trade for the short term. However, do read our Dogecoin forecast before investing and safeguard your hard-earned money. 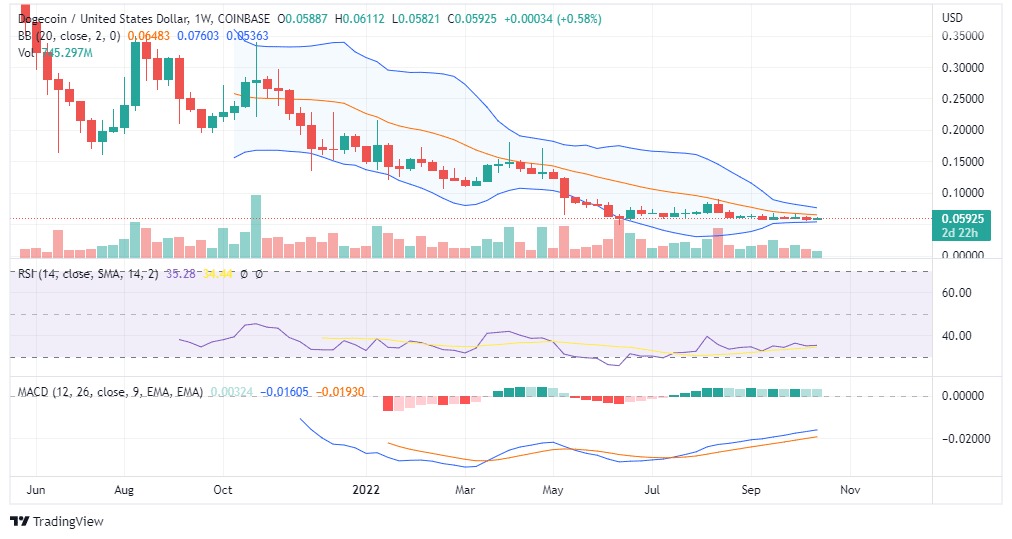 However, we do not encourage retail investors to buy Dogecoin for the long term because these meme coins are mainly influenced by positive news in the market. They do not have strong fundamentals to sustain for the long term. However, developers are working to extend their use cases.

Dogecoin has gained more than 20% in the last week, outperforming many other leading cryptocurrencies like Bitcoin and Ethereum. As...

Dogecoin has been one of the most critical cryptos; it mostly relies on price action and buying sentiment; fundamentals don’t...

Dogecoin close to its previous lows: Was DOGE surge temporary?

The movement of Dogecoin depends on market sentiment. When the market corrected over the news of the FTX liquidity crisis,...

Dogecoin has been fired up as if it’s going to the moon. The technical, price action, and fundamental resolve showcased...

After a long downtrend in the last eight months, the crypto market has finally woken up in the last two...

its pros, cons, and how it works